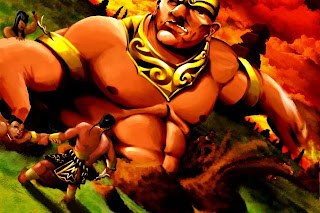 ONCE upon a time in Bali, a man and his wife were praying. They have been married for a long time but did not have any children. They asked God to give them a child. They prayed and prayed.

God finally answered their pray. The wife, then, got pregnant and they had a baby boy. They were very happy.

The baby was extraordinary. He was very much different from other babies. He ate and drank a lot. Day after day he ate more and more. His body was getting bigger and bigger. And by the time he was a teenager, his body was as big as a buffalo. People then started to call him Kebo Iwa.

Because of his eating habit, Kebo Iwa’s parents spent a lot of money to buy his food in large amount. They finally went bankrupt. They gave up and asked the villagers to help them provide the food.

The villagers then worked together to cook and build a big house for Kebo Iwa. He was like a giant. He could not stay in his parents’ house anymore because of his big body. Sadly, after a few months, the villagers also could not afford to cook him the food. They then asked Kebo Iwa to cook his own food. The villagers just prepared the raw materials.

Kebo Iwa agreed and as an expression of his gratitude to the villagers, he built a dam, dug wells, and he also protected the villagers from animals and people who wanted to attack their village. He did those things by himself.

Meanwhile, the troops of Majapahit were planning to attack Bali. They knew about Kebo Iwa. And they also knew that they could not conquer Bali with Kebo Iwa there. Kebo Iwa was more powerful than they were.
Gajah Mada, the Maha Patih (Chief Minister) of Majapahit then planned something. They were pretending to invite Kebo Iwa to Majapahit to help them dig some wells. They said that Majapahit was suffering from a long dry season and needed much water. Kebo Iwa did not know the plan, so he went to Majapahit.

When Kebo Iwa was busy digging a very big well, the troops covered the well. Kebo Iwa had difficulty in breathing and buried alive. He died inside the well.

After the death of Kebo Iwa, Bali was conquered by Majapahit. Until now, people still remember Kebo Iwa because he had done a lot for Majapahit and Bali. The stone head of legendary Kebo Iwa can be found in Pura Gaduh temple in Blahbatuh.